2015 marks my 25th year as a Bladesmith working and living here on the Island of Skye on the west coast of Scotland. I taught myself everything i know from books and practical application,in an age before the internet and immediately available information. It has not been an easy path but over the years i have learned how to work with steel,wood,leather and precious metals, all as part of the process for producing the living Sword entirely from raw materials.

I decided after my first few years to award myself a makers stamp,which is hot forged into the tangs of all my blades, i had no-one else to assess my work so i had to be my own critic,and held back from this rite until i felt it was earned. At this time i have decided to further challenge myself to produce a Masterpiece,in the sense that i would be able to call myself a Master of my craft,a challenge not to be taken lightly.

I first saw the Fetter Lane sword (or what is left of it) in the book ‘the Sword in Anglo-Saxon England by H.R Ellis Davidson. I was immediately struck by the bizarre serpent design on the one side of the pommel,it looked somehow modern and ancient at the same time,and unlike anything else i had ever seen. i was eventually able to get a high resolution photo through the British Museum,and this showed the incredible detail and complexity of the designs,as well as the fine silver and gold highlights. I was determined that this would be the piece i would focus on.

One other maker has approached an interpretation of this sword,but i felt that rather than the bottom half of the grip being simply an inversion of the top,the original maker would have used another design idea,so i brought my imagination to what was left of the original Sword and began to map out what it may actually have looked like.

A year or so ago i approached Mick Maxen to make the billet steel for the blade,the remit being that this should be something exceptional that also pushed his skills as a pattern welder to their limits. He decided on something more ambitious than he had yet attempted, a seven bar alternate twist blade,something that would really shine. The grip ,guard and pommel were all carefully hand carved in wax and cast in Sterling Silver,which i then polished and gilded to highlight the designs as on the original piece 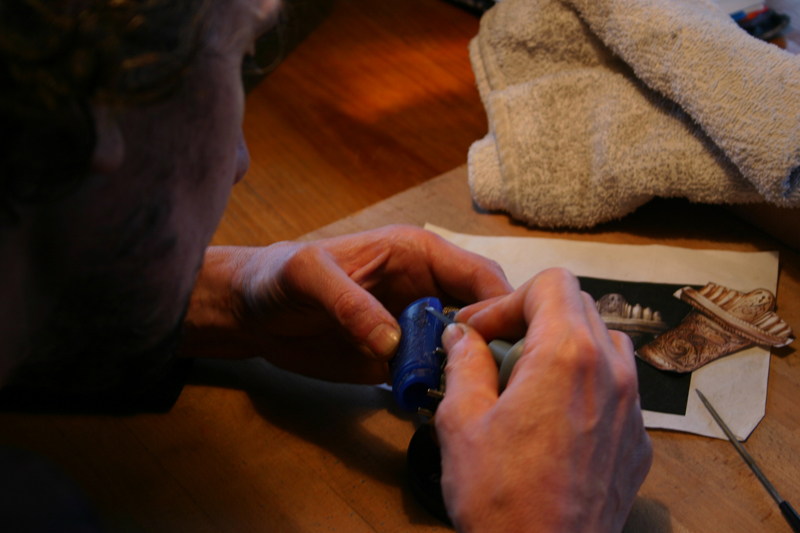 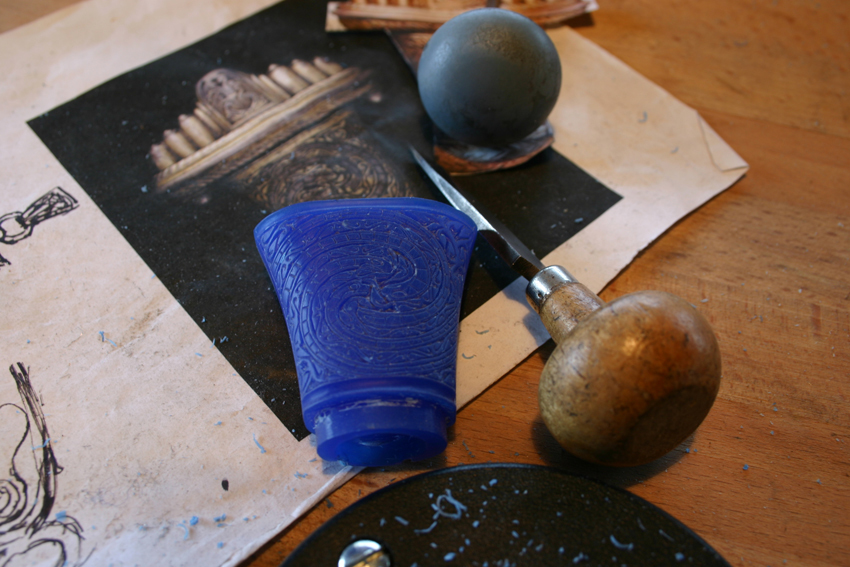 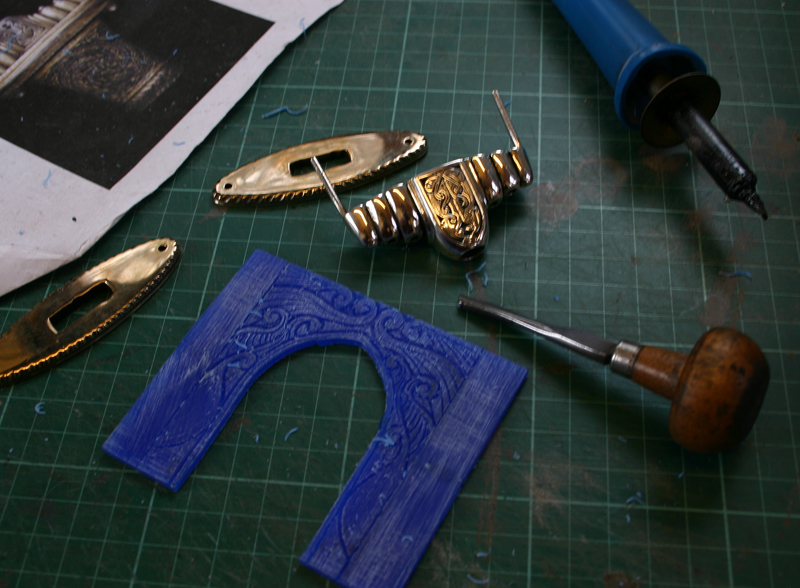 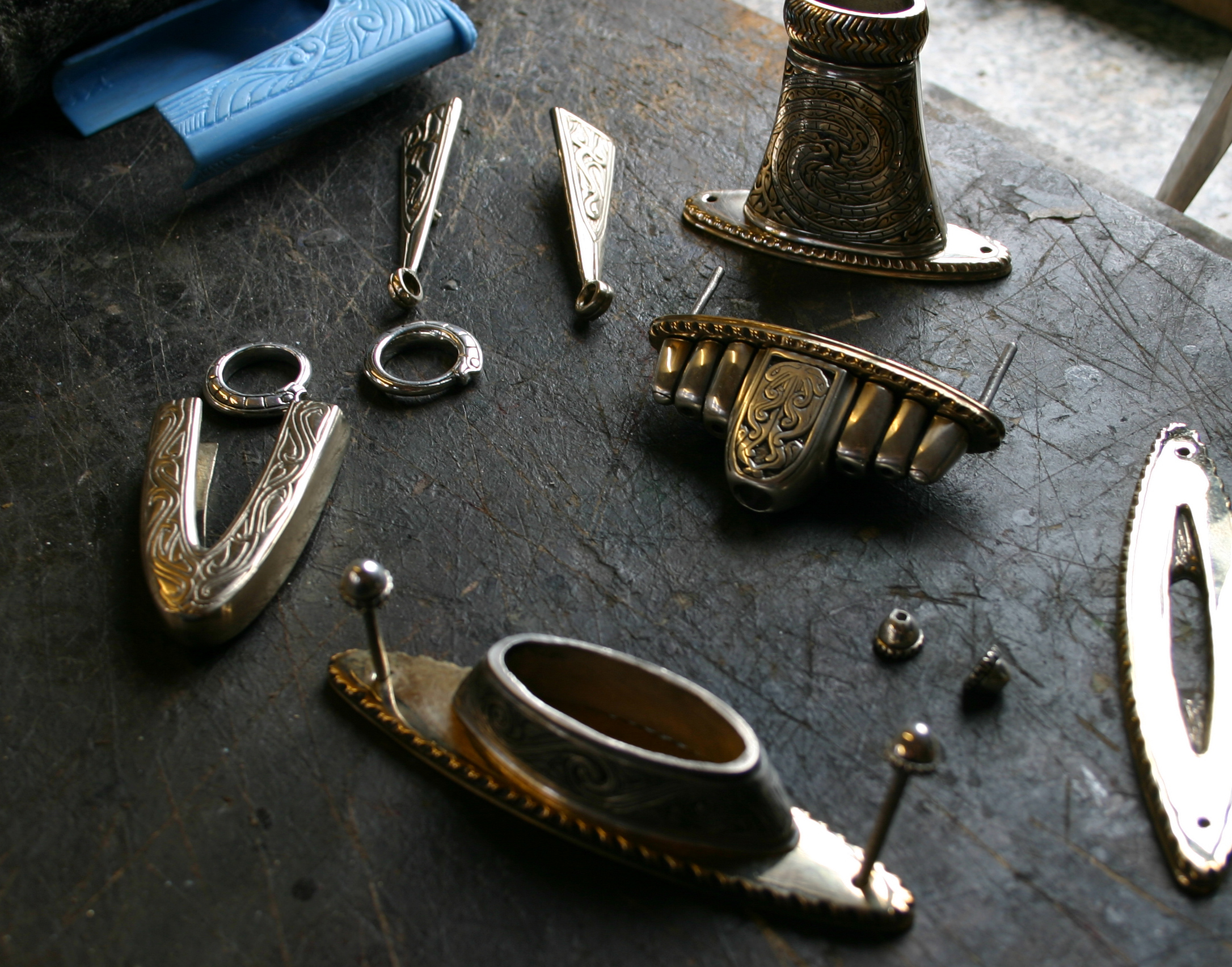 Each rivet head and stem,each carefully filed scallop on the guard sections,everything had to be perfect.

The designs follow the three prominent themes, the serpents, the sea and the leaves. These elements were continued into the scabbard mounts and the belt buckle and strap end,again in Sterling Silver and intricately carved. 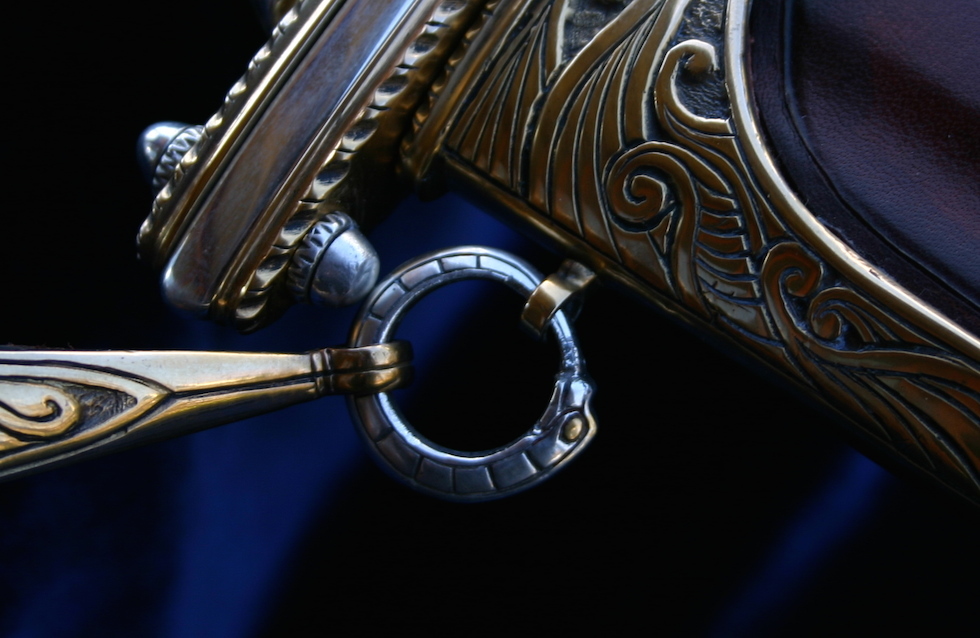 I decided to double fuller the blade to both set it apart from many other pieces but not so far that it would be an impossibility, this also allows the twists in the pattern welding to really show well. I forged the blade edges and tang down,ground and polished prior to the final moment of truth when the blade goes into acid and the pattern emerges magically. 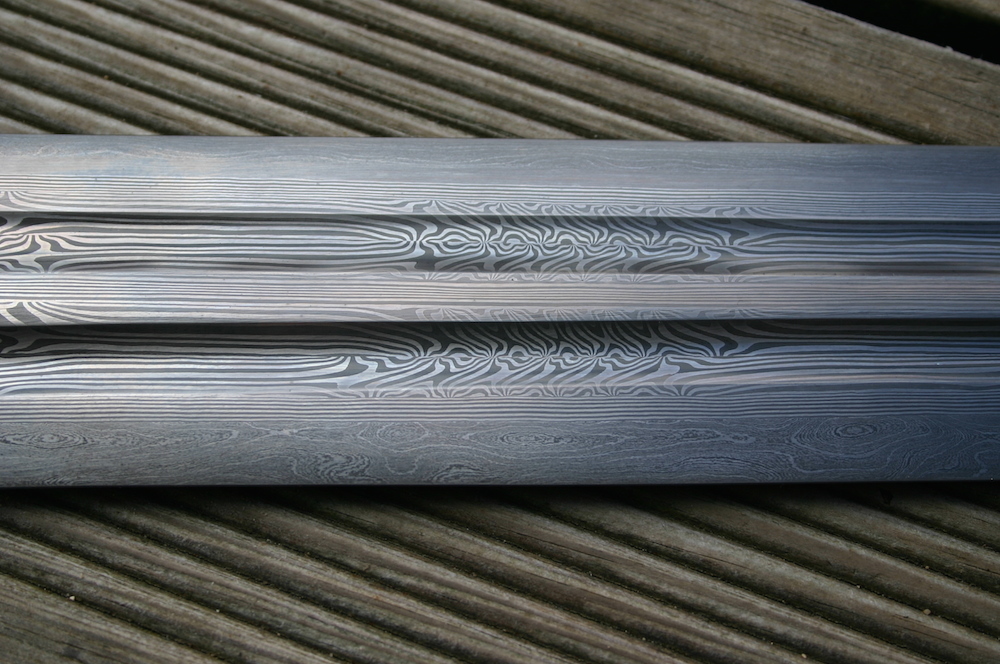 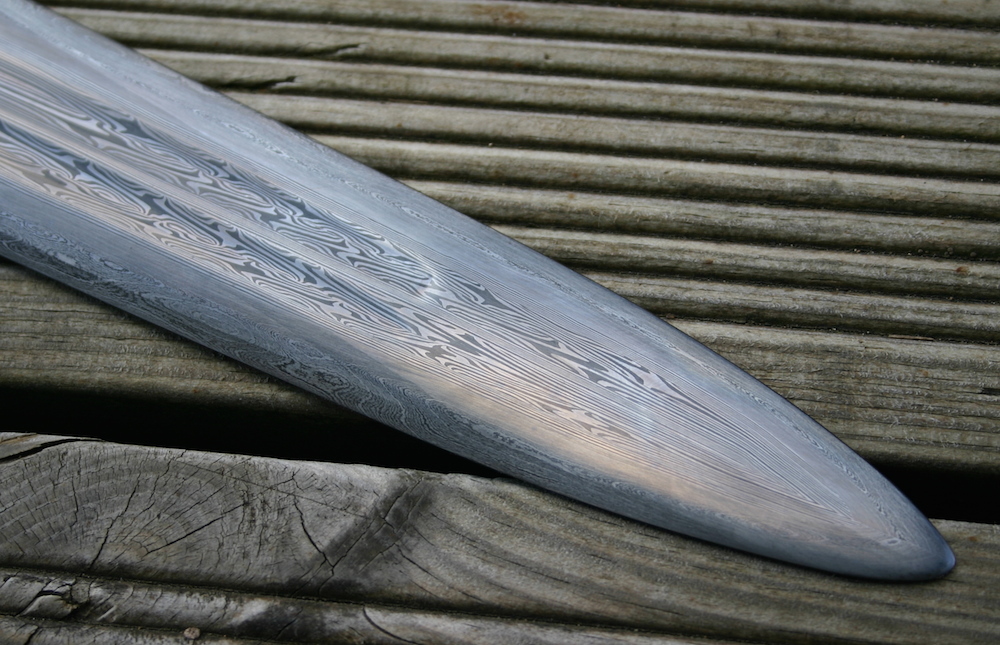 The scabbard was made of ash boards covered with a hand stitched fine calfskin,and mounted with the chape and locket pieces,small silver serpents acting as the connecting rings to the fine silver shoulder belt. 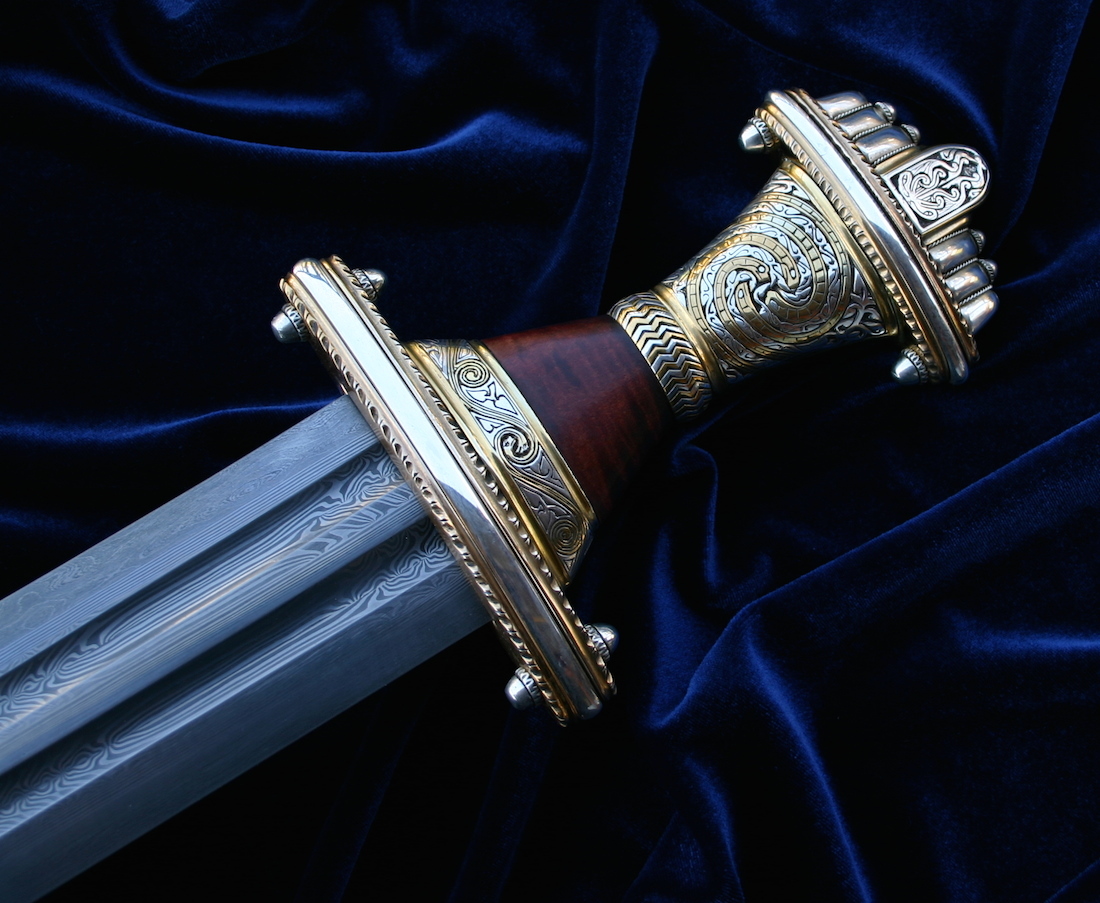 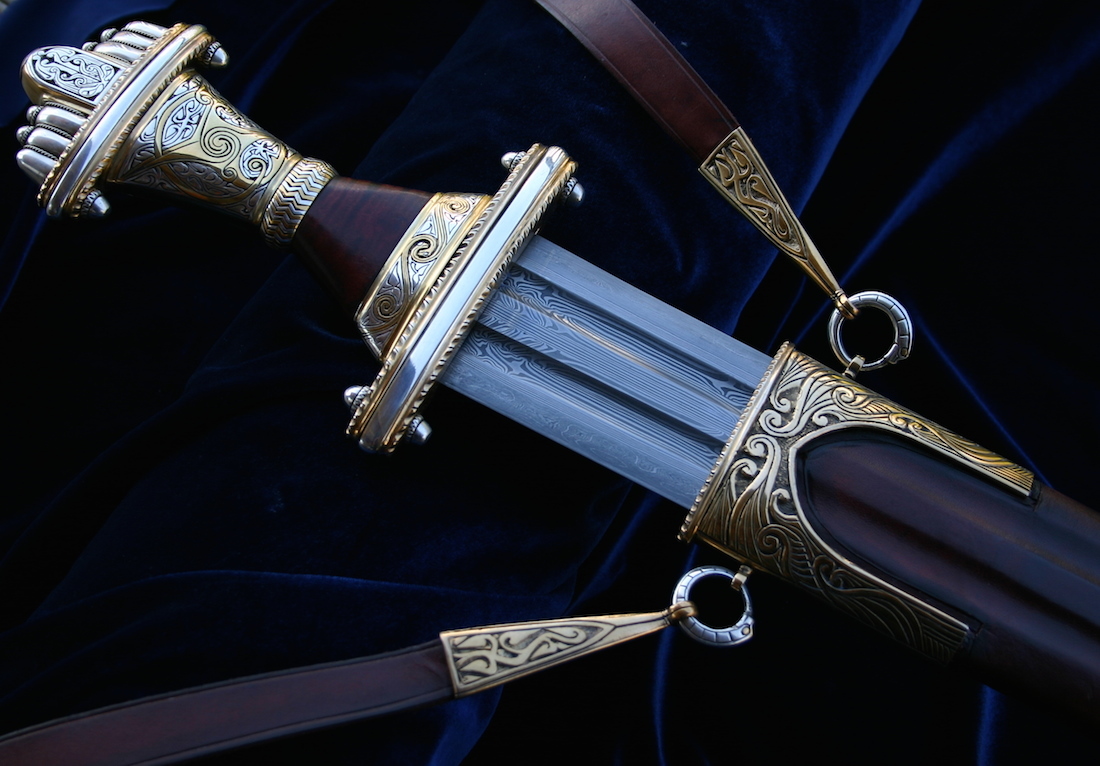 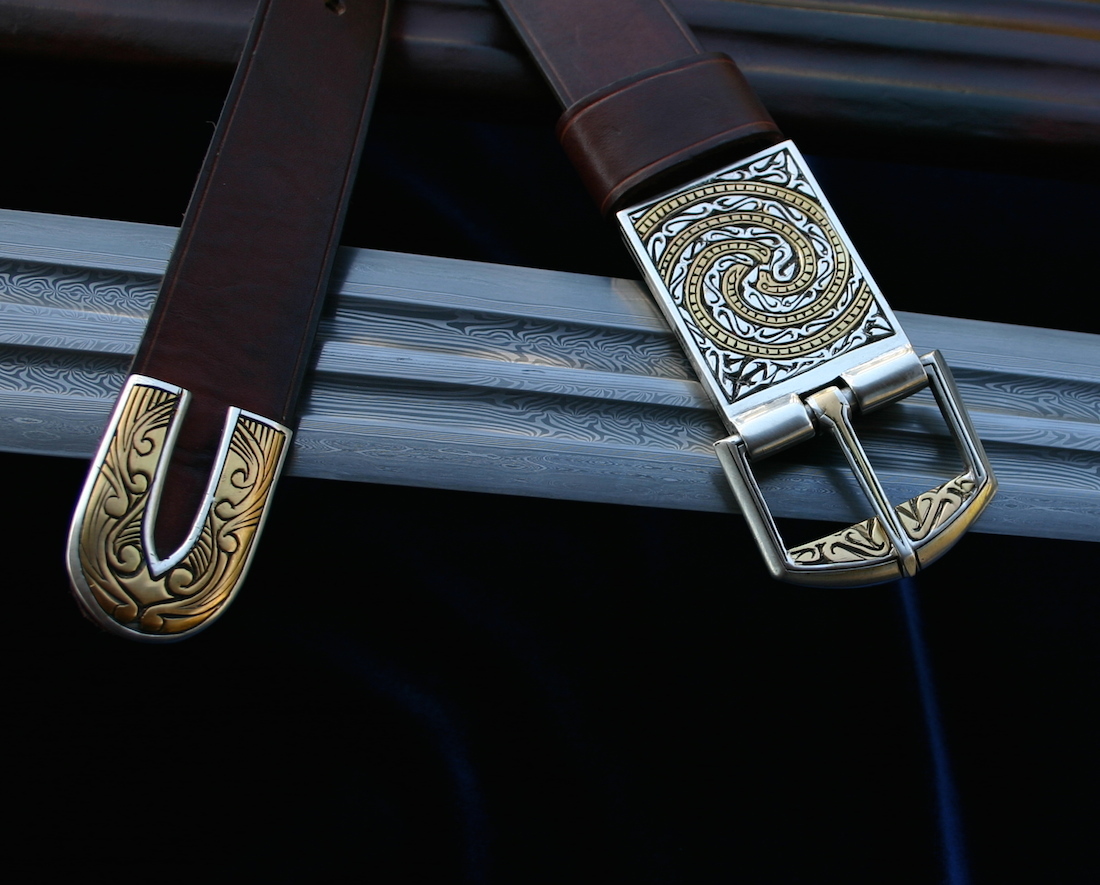 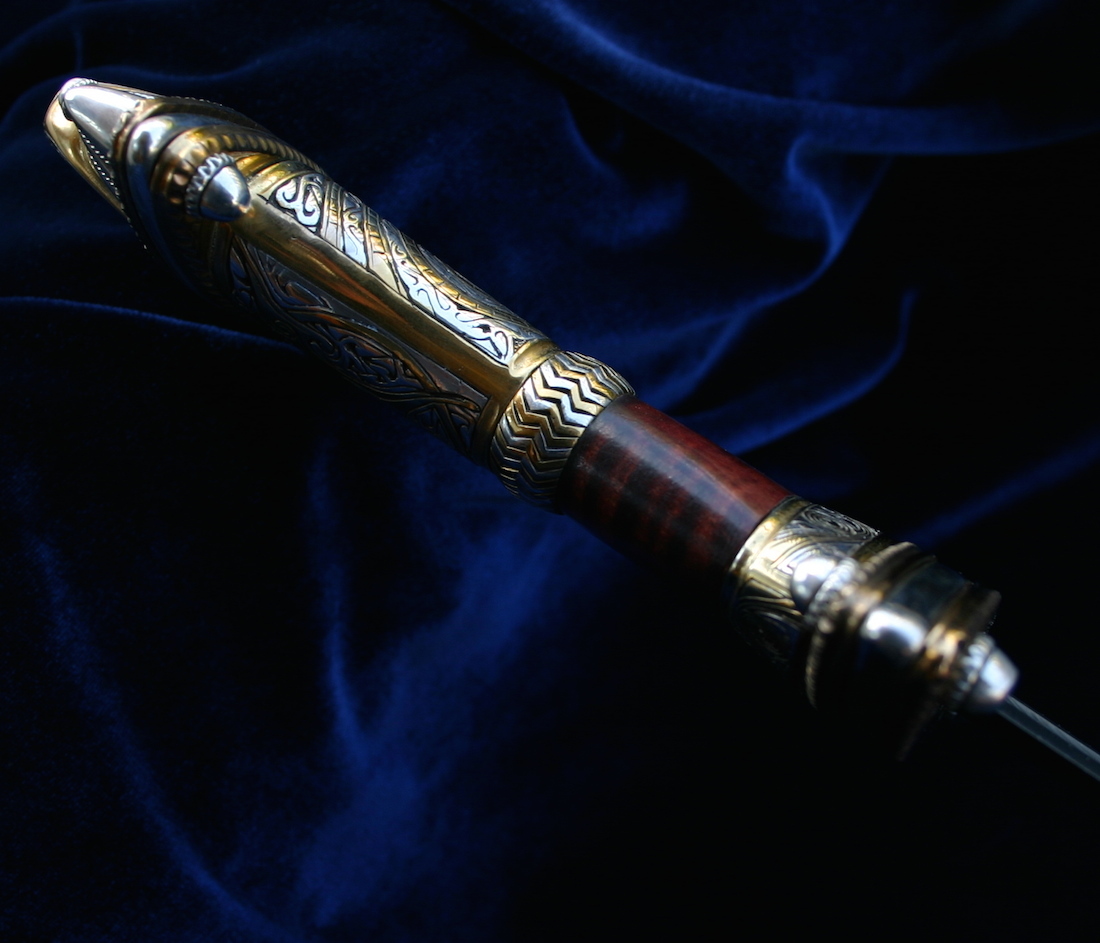 This is the result of a lot of consideration and fine work,i like to think of it as a marker post in my own career, and a very fine tribute to the Masters of old.

If you have an idea, a sketch or design of your own, or if you would like to commission one of my stock items just get in touch with me at: